The first white man to visit the region now known as Henderson Harbor and the Town of Henderson, New York was likely the French explorer Samuel de Champlain (1567-1635). In 1608 Champlain had led a group of colonists to Quebec to establish a fur trading center. He later befriended the Huron Indians and sided with them in their dispute with the Iroquois.

In 1615, five years before the Pilgrims landed at Plymouth Rock, Samuel de Champlain accompanied a war party of some 2500 Huron Indians into Iroquois territory in the vicinity of the present town of Henderson NY. They crossed the eastern end of Lake Ontario from Kingston in Canada to the Galloup and Stony islands, and entering Stony Creek south of Henderson Harbor where they concealed their canoes in the woods . The invaders proceeded into the heart of the Iroquois country, where they met defeat and Champlain was wounded. This unsuccessful invasion of the Iroquois territory was the beginning of the end for French domination of North America.

From 1615 to 1796 there apparently were no permanent settlements made here. Military posts were established during the French and Indian War, and during the Revolutionary War, but the area as a whole was wilderness frequented only by Indians and wandering trappers until the Spring of 1796.

A treaty was made with the Indians in 1784, ratified by the Oneidas in 1788, by which the territory of Jefferson was included in a vast area of land ceded to the State of New York.

In 1791 Alexander Macomb, who amassed a fortune during the Revolutionary War, purchased 3,670,715 acres (14,855 square kilometers) in what was the greatest land grant ever made by a State to individuals. The tract included much of northern New York, along the St. Lawrence River and Eastern Lake Ontario, including the entire Thousand Islands Region. He paid about twelve cents an acre. The purchase was divided into ten large townships. From this purchase are derived the deeds for all the lands that are now included in Lewis, Jefferson, St. Lawrence and Franklin Counties, and portions of Herkimer and Oswego Counties.

During the Spring and Summer of 1796, land surveyor Benjamin Wright divided what was known as the Black River Tract into eleven towns. The town now known as Henderson was indentified as “No. 6”, and noted that it was a “pretty good town.” The town was blessed with a good harbor and plenty of timber.

Henderson is named after William Henderson who settled there in 1796.

By 1805 it was estimated that the settlers in the area numbered nearly 1500. 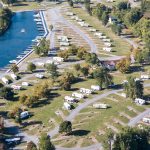 Located on Lake Ontario and the scenic 1000 Islands region, Association Island (accessible by bridge) has a colorful history as … Continue reading →

Captains Cove Motel & Marina is situated on the water in Henderson Harbor NY. the premier fishing destination in the … Continue reading → 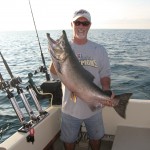